By Patricia Waldron for the Cornell Chronicle

On top of the COVID-19 pandemic, people worldwide have dealt with an infodemic – a flood of ever-evolving information and misinformation about the virus, causing confusion and mistrust. New Cornell research finds that in remote parts of Bangladesh with little internet access, people have relied on local experts, spiritual views and their sense of social justice to evaluate new coronavirus information.

“How do you fight this crisis of misinformation, especially when the people in rural Bangladesh have limited access to information and communication technology?” said Sharifa Sultana, a doctoral student in the field of information science and lead author of the new study. “By understanding the people better, we can design technologies that help them combat misinformation.”

The new study, “Dissemination, Situated Fact-Checking, and Social Effects of Misinformation Among Rural Bangladeshi Villagers During the COVID-19 Pandemic,” published Oct. 18 in the Proceedings of the ACM on Human-Computer Interaction. It received the Diversity and Inclusion Recognition Award at the Association for Machine Computing's 2021 Computer Supported Cooperative Work conference.

Sultana traveled to Bangladesh in March 2020 to understand how villagers evaluate suspicious COVID-19 information. Before the pandemic, many already distrusted the formal health care and medical system, which is primarily government-subsidized. Rural hospitals are often understaffed, and many suspect that managers refer patients to private clinics in exchange for kickbacks. Villagers instead rely on medicine shopkeepers called Parar-daktars, who have little or no medical training, and rural witches who provide exorcisms and herbal medicines. 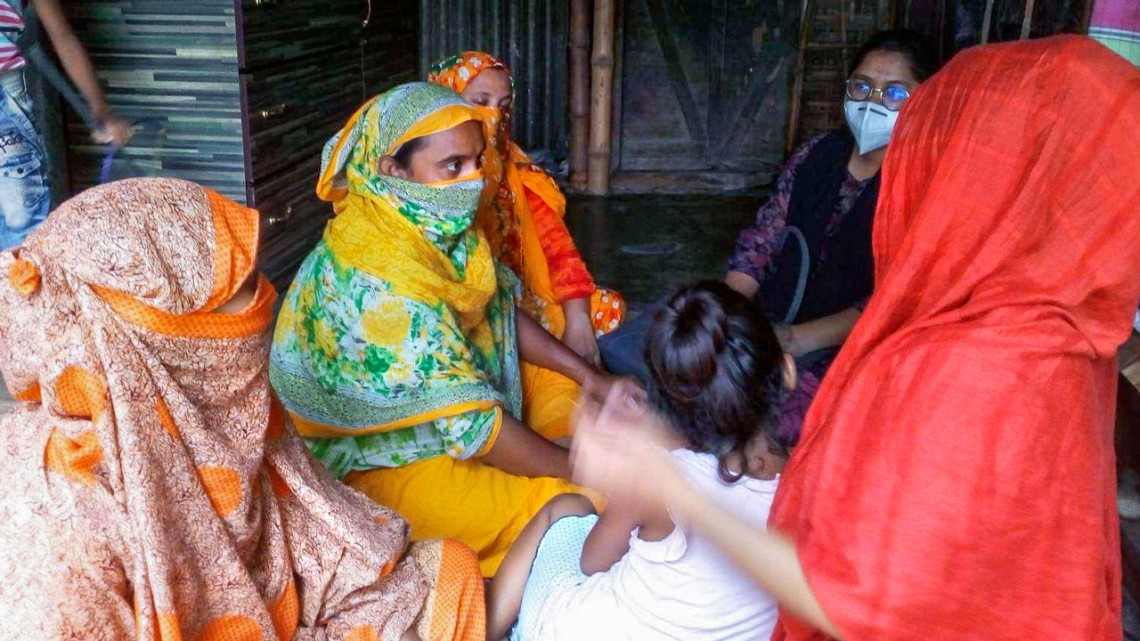 Sharifa Sultana (back right) conducts a focus group with women on their porch in Shongkorpur, Jessore in 2020, as a part of her ethnographic work in Bangladesh.

Sultana spent six months visiting three villages in Jessore, a remote district in southwest Bangladesh dominated by agriculture and tilapia fish farming. Sultana grew up in this area and speaks Bengali in the local dialect. She worked with the nonprofit Rural Reconstruction Foundation to conduct interviews, focus group sessions and general observations with 90 individuals using proper COVID-19 precautions. Only about one-third of participants had a smartphone and fewer than half had access to Facebook.

She found that villagers often shared medical misinformation, such as a rumor that tilapia ate medical waste and carried the virus. People frequently believed religious stories, such as the idea that Islamic fasting would prevent coronavirus infection, and accepted Indigenous knowledge, like the use of unverified herbal remedies.

People also repeated political rumors, including claims that local politicians failed to distribute government food aid. The rumors led to disruptions in community life, the collapse of the tilapia market and even greater distrust of the medical system.

Finally, some people accepted suspicious information if it reinforced the community's sense of morality and justice. For example, believing that farmers fed their tilapia medical waste, some claimed that police would arrest people with tilapia in their freezers, using the rumor to seek justice against dishonest fish farmers.

Modern fact-checking tools present the factual truth of a claim, but Sultana proposes that designing new tools that consider local knowledge, myths and cultural beliefs will be more effective at combatting misinformation in Bangladesh. Finding and removing misinformation from social platforms are not enough, she said.

“People need to be told that, ‘OK, what I told you yesterday is wrong,’ so that they can apply it to their lives,” she said. “Otherwise, there is no social justice for them.”

She also suggests that fact-checking tools take a democratic approach, involving a network of local NGO workers, health care providers and local government, along with the tech industry, to ensure that the tool abides by the local value system.

Currently, Sultana is running workshops and group discussions with rural villagers to find out what type of tool would be most culturally appropriate.