Eric’s interdisciplinary Information Science education afforded him room to explore the many aspects of technology, from data visualizations, UX design and prototyping, to back-end programming and front-end interfaces. “All the skills from these programs will prove fruitful in getting these jobs I’m interested in,” he said.

Take note, students: it’s okay if you have yet to make a firm decision on your career path. Current MPS student Eric Porter (Info Sci ’17; MPS '18) gets it. He was there, too.

“I didn’t know what I wanted to do until March of my senior year in undergrad,” he admits.

But by then, mere months before graduation, Eric’s interdisciplinary Information Science education had afforded him room to explore the many aspects of technology, from data visualizations, UX design and prototyping, to back-end programming and front-end interfaces.

For Eric, coding had been a budding interest when he arrived at Cornell as a community college transfer student in his sophomore year. Since then, the Poughkeepsie, NY native has grown into a Javascript master while strengthening his understanding of foundational computation concepts and expanding his skillset into user-experience design and even tech consulting. 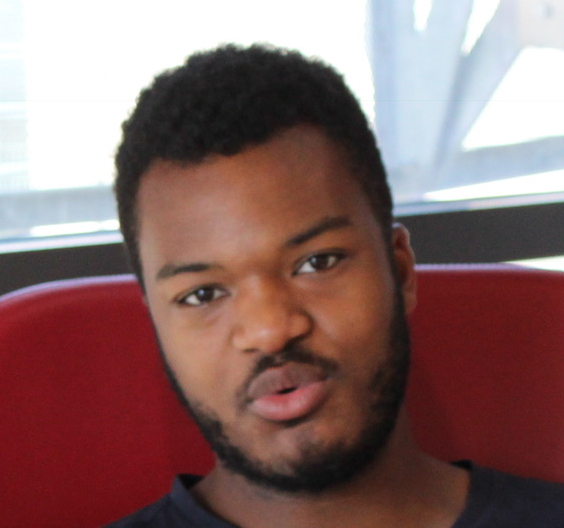 Eric Porter (Info Sci '17, MPS '18)
Today, as an MPS student with a clearer professional vision, Eric is hyper-focused on his job search, and things seem to be going just fine: During our conversation, he fielded a promising message from a potential employer.

“All the skills from these programs will prove fruitful in getting these jobs I’m interested in,” he said. “Whether it’s product design, consulting or front-end development, I have the skill set to do it. Now, it’s a matter of where do I want to focus.”

You completed your undergrad here at Cornell, right? Yes, I did my undergrad in Info Sci and graduated last year. I transferred into the program (through CALS) as a sophomore from Dutchess Community College.

How did your path ultimately lead to Cornell Information Science and the MPS program? I was a business major in community college, and my dad – who works at IBM – had said coding could be important, so I said, ‘Why not?’ I took a few classes and fell in love with coding because I liked the idea of designing logically-based solutions that do things on an actual computer. The back-end was really interesting to me, and I felt I wanted to do more of this if I got into Cornell. My school had an articulation agreement specifically with Cornell, and my GPA was pretty high (3.8), so I knew my chances of getting in were good. So I applied, and prayed, and got in. Since then, I’ve been an Info Sci kid.

What were some of the courses you took as an undergrad, and how have they proved useful? I took classes like CS 2110 (Object-Oriented Programming and Data Structures), INFO 2950 (Introduction to Data Science), and COGST 1101 (Introduction to Cognitive Science). INFO 2110 was very useful. I took it as a sophomore, but I wished I would have taken it again in my senior year because it would have prepared me for job interviews. All of my coding skills would have been up to snuff. Which is why [moves closer to mic] … anyone who’s an Info Sci undergrad, take CS 2110 your junior and senior year. Even if you pass it your junior year, take it again, because it’s great for job interviews.

What’s your experience at Cornell been like? What have you been learning?  When I got here, I didn’t have a portfolio, and I didn’t know if I wanted to do product design. I wasn’t sure if I wanted to move into development. I was still teetering that fine line of, Do I want to be a product designer or developer? Because I love the front-end and seeing how interactive you can make an interface. I find that fascinating. And I like product design because I like having my hands in some of the things being done around technology, be it the algorithm that was developed that created a new set of commerce or a new idea that was never brought to the forefront. Seeing how you can take this code and put it here or there and make a way more efficient website. Some of that stuff has been cool. Plus, I love Javascript. It’s a fun language to get beautiful things on the screen. In my senior year, I took INFO 5100 (Visual Data Analytics for the Web) and I fell in love, I was like, This is what I want to do.

So, product designer or developer, that’s where you see yourself. But Javascript and coding has been a primary focus, it sounds like?  It has been, but I don’t want to be lowly entry level guy sitting in a cubicle, moving code, and not doing much. I wanted to be the guy that does it all, who decides what’s going to look good, be functional and apply to a market. For instance, a buddy just reached out to me about having a business targeting college kids. She needs a website, so I’m trying to script it up as both a designer and programmer. I feel like I can do the whole shebang, but working in industry, I need a specific title, so product designer would be cool. Which leads me to the DTI.

The Digital Technology Immersion sequence.  I wanted to center my energy this semester on job hunting. Next semester, come January, I plan to have three to four offers. That’s how ambitious my intent is. Everyone I meet, ‘Here’s my resume’. I enrolled in the DTI in order to learn more about consulting. I’m taking a management consulting class right now, and it’s teaching me how to market myself for recruiters but also how to sell salt to a slug. If you can do that, you’ve made it in consulting. If not in the realm of computer science, if I can’t find a development job, I want to do tech consulting. All skills from these programs have been fruitful in potentially getting these jobs I’m interested in, be it product design, consulting or front-end development. I have the skill set to do it. It’s a matter of where do I want to focus.

How much learning are you doing outside of the classroom? I’ve done extra-curriculars around coding, like Cornell Make, which is a maker platform that helps students find student-run projects. It’s like a pseudo-Tinder for getting to work on campus projects that are cool. I also did an independent study with [Department of Communication Professor] Drew Margolin. He had a project where I used D3 [Data-Driven Documents, a Javascript library for visualizing data], which I had wanted to learn. This summer, during an internship in Namibia, I did script sorting of Twitter data related to policy. Also, I make music, which gives me experience with other interfaces. I use programs like Logic Pro, which is big-boy technology, but I’m wondering, ‘How can we make this better?’

As an MPS student, do you have a particular focus area? UX, because it’s all about interfaces, man. Say you start a company, you get a product and you have somebody who is a hardcore back-end CS guy who has no sense of design. He/she might have an architectural design and the functionality but no solid front-end design. You won’t have as robust of a site. It could look like Craigslist and be functional, but everyone will say, ‘This is ugly.’ I think about this one designer, Melanie Daveid. Her website is awesomely interactive. It’s one of the coolest things I’ve seen on the internet. It’s the human component that makes websites, and tech in general, way more fun. You can have functionality, but that isn’t the whole picture. I see myself as in-betweener, someone who can conceptualize a design and implement it.

What have been some of your favorite courses? INFO 5100 (Visual Data Analytics for the Web). [Professor] David Mimno is an amazing human being. I also liked INFO 4240 (Designing Technology for Social Impact) with Phoebe Sengers. Of course, CS 2110 (Object-Oriented Programming and Data Structures). There are a lot of classes I have special places in my heart for: INFO 2921 (Inventing an Information Society), which is not necessarily an MPS class but more undergrad; INFO 4940 (History of the Interface), with Branden Hookway; NBA 5690 (Management Consulting Essentials), if you end up doing the DTI. It’s a great class if you want to do tech consulting. Randy Allen is an awesome professor; take her class.

As a Cornell student, what’s it like living in Ithaca? Living in Ithaca is dope because you have a lot of amazing things happening. If you go down to the Commons, you’ll find any sort of food you’re interested in, from Asian and Mexican tapas to waffles. There’s food galore, and there’s different events like Apple Fest, the Harry Potter festival. The TCAT is a godsend. If you’re on campus and need to get from one place to another, you’re there. Plus, it’s free for your first year, which is ideal for MPS students. As for the weather, there’s always someone to bond with over hating Ithaca’s ever-changing weather. You have to get used to the cold. Somedays you’ll go outside and say, ‘Why did I come here? I have icicles in my nostrils.’ And sometimes, the class workload is a lot. But it’s also a lot of fun, because you get to bond with people.

Got any advice for current and future undergrad and master’s students? Part of me wants to say, You don’t have to know what you want to do going in. It’d be preferred if you had an interest. Consider concentrations and do some research to see where you might fit in best. But as an undergrad, I didn’t know what I wanted to do until March of my senior year. I knew I liked front-end and knew I liked UX, but I hadn’t considered being an actual designer as a serious profession until March last year. I had gone on a Tech Trek to visit a major company, and they said, ‘We’re looking for designers; we’re not looking for programmers anymore.’ It made me realize how important art and architecture and product design really are. So, you don’t have to know what you want to do.

Secondly, don’t be afraid to ask questions. I’ve asked Gilly [Leshed] so many stupid questions. Remember that you don’t know as much as you think you do, and that’s okay. No one’s smart enough to know everything, so don’t feel bad about being dumb in a certain area.

Go out and explore. There’s a lot of things to do on campus. Yes, for MPS students, you only have a year. Knock off as many of the 161s you can in a week – climb the steps, throw the rocks, go get bubble tea at café pacific, check out things in Collegetown, explore the town, really immerse yourself in the Cornell community.

Oh, and don’t hesitate to network with your professors. That’s one thing people lose sight of. Hang out, meet for lunch, go to the bar with them, because they are the people you can reach out to later in your career. Build up rapport.