Anthonia Carter has launched a startup to assist and elevate business owners of color in her hometown of Birmingham, Ala., and bridge the gap between Black, Indigenous, people of color (BIPOC)-run companies and the venture capital industry.

Founding and building a startup company into a sustainable, profit-generating business takes guts, determination, and resilience.

A big check from capital investors certainly helps, too.

But if you’re an entrepreneur of color, seed funding has been hard to come by: since 2015, just over 2 percent of venture capital funds went to Black- and Latinx-owned businesses, according to a report from Crunchbase last year. This disparity has not only stunted opportunities for Black startup founders but, to Anthonia Carter, has had the compounding effect of limiting their entrepreneurial aspirations. 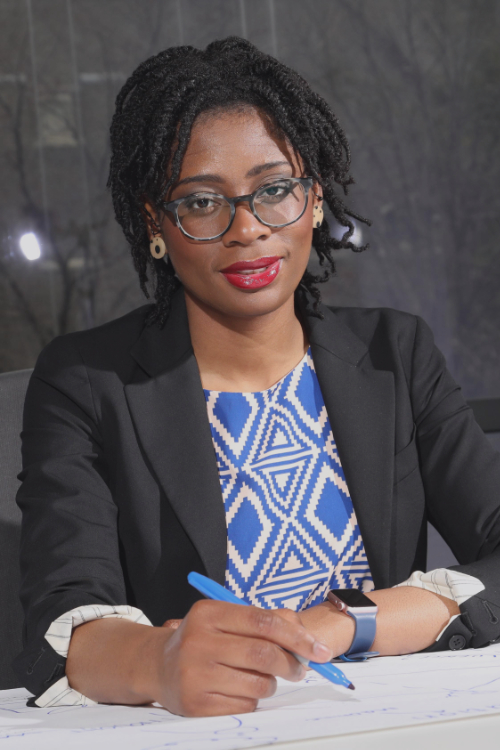 “I want to see transformation in Black startup founders and get them to think, ‘Yeah, I could have a multi-million dollar or billion-dollar company,’” said Carter, a Fulbright Scholar and doctoral student in Information Science at Cornell University. “On the investor side, I want them to know who these Black founders are, what they bring to the table, and what investors are missing out on.”

This year, on the heels of being awarded an IIE (Institute of International Education) Centennial Fellowship, Carter launched a startup of her own called EGK Starters. Named as a phonetic nod to the Nigerian-Igbo word ijiko, meaning “to connect,” EGK Starters has a two-fold mission: assist and elevate business owners of color in her hometown of Birmingham, Ala., and bridge the gap between Black, Indigenous, people of color (BIPOC)-run companies and the venture capital industry.

“Investors can’t just say ‘Black Lives Matter,’” Carter said. “They have to do the hard work of putting money where their mouths are.”

Venture capital — wherein wealthy investors infuse startup companies with cash, industry experience, and managerial expertise in hopes both parties catch and ride the wave of long-term growth and profit generation — is a high-risk, high-reward investment model and an undeniable force in the U.S. economy: 43 percent of all public U.S. companies formed in the last 40 years are backed by venture capital, according to a report from Insights by Stanford Business.

As big and bold of a vision Carter has for EGK Starters, she is starting small and returning virtually to her hometown to do so. Carter and her team of three at EGK Starters currently work with four Birmingham-based startup founders to understand their businesses, goals, and challenges, while offering strategies to help them build sustainable and profitable companies.

Tamika Hinton, founder of Out of Office, a virtual assistant firm that helps small businesses, is one company working with EGK Starters.

“For the first time since I started my business, I had someone to dream it out with and encourage me to dream bigger,” she said in a Twitter post. “The EGK team leaves no stone unturned.”

It’s in Birmingham where Anthonia’s mother, a native of Nigeria, raised her daughter with the wish that she might pursue a career in a STEM field. Lucky for her mother, Anthonia’s early love set her on the right course.

“Math was the subject I grew up to love. It was my first academic language, my superpower,” she said. “Calculus and algebra, all of it fascinated me.”

Art did, too. Anthonia could always draw well, and her middle- and high-school years spent in the art room helped to nurture a creative side she’d continue to mold at the University of Alabama at Birmingham. Mindful of her mother’s wish for a STEM degree but true to her own calling, Carter graduated with Bachelor’s and Master’s degrees in Mathematics and a Bachelor’s of Fine Arts in Art Studio. A Fulbright scholarship in 2017 brought her to Northumbria University in the United Kingdom, where Carter thrived in a learning environment she described as like a design-research consultancy. She graduated with a Master’s degree in Multidisciplinary Innovation.

Investors can’t just say ‘Black Lives Matter,’” Carter said. “They have to do the hard work of putting money where their mouths are.

Anthonia Carter (right), now a doctoral student in Cornell Information Science, collaborates with a coursemate on a team project during her studies at Northumbria University // photo provided

By the time she joined the Ph.D. program in Information Science at Cornell in 2019, she’d become, by her own admission, a “creative misfit” — a blend of mathematician, artist, researcher, designer, and community builder. Cornell’s Department of Information Science was a perfect fit, home to fellow multidisciplinary scholars and creatives with similar goals of leveraging technology for the greater good.

“Info Sci felt like it embraced my full identity,” she said. “Here, I can utilize the analytical side of my brain, which math and machine learning does, but I can also shift to a qualitative design project without people thinking, ‘What is she doing and how does it connect?’”

Her IIE Centennial Fellowship puts a one-year timeframe on EGK Starters, but Carter intends to see her startup through beyond that.

“I dream big because I have been surrounded by mentors and experiences that have expanded my point of view,” she said, pointing to motivators like her undergraduate advisor and art mentor during her BFA studies, as well as her experience at Northumbria. “Now, it is my responsibility as a role model to inspire others to dream big.”

Louis DiPietro is the communications coordinator for the department of information science.