Student App Developers Enrich Life on Campus and Beyond

This article originally appears at Cornellians

Want to know when the next bus is coming to take you from Collegetown to the Ithaca Wegmans? Curious about what’s on the menu at Okenshields, and how long the line is? Looking for a fun new fitness class, or places where you can play basketball on campus?

There’s an app for that—all of it—and more.

Thanks to a vibrant student organization, a variety of handy, Cornell-specific apps are available free of charge in the Apple App Store and Android’s Google Play. Dubbed CornellAppDev, the group—comprising more than 50 coders, designers, marketers, and others—not only creates useful tools for the campus community, but gives its members valuable, hands-on experience.

“Our focus is on improving students’ lives; everything we make is intended to ease some sort of pain point they experience day to day,” says Renee Hoh ’22, an information science major and leader of AppDev’s design team (the position will change hands for spring ’22). “Our work comes from a place of helping others—building something that they’ve always wanted, or never knew they needed.” 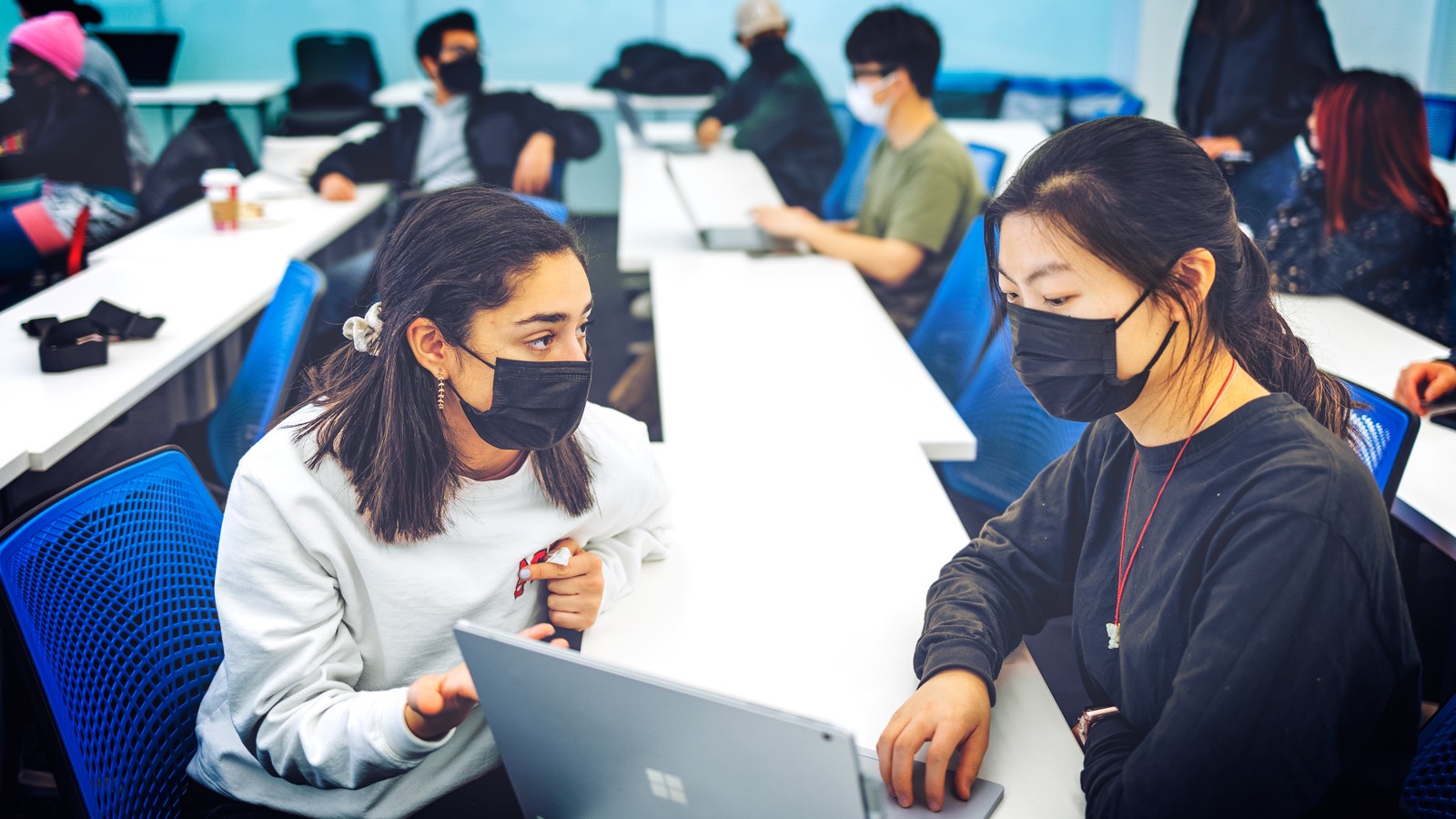 Founded in 2014 by Eric Appel ’16, AppDev currently has five original apps—each of them developed and maintained by a dedicated team, known as a “pod”—up and running, with thousands of active monthly users on campus and beyond. “Eatery” was its first; it not only details menus and hours at dining halls and cafés, but lets users keep track of their University-managed virtual cash, known as Big Red Bucks.

The newest app, launched this semester, is “Pear,” which encourages students to make friends by matching them with someone new each week, based on shared interests and campus involvements.

Additionally, AppDev maintains “CourseGrab,” which lets students know when a spot opens up in a course they want to take, but is full. (Since CourseGrab originated with another team, it’s what’s known in the trade as a “legacy” app—so by working on it, AppDev members gain insight into the common industry task of maintaining a product you didn’t develop.) 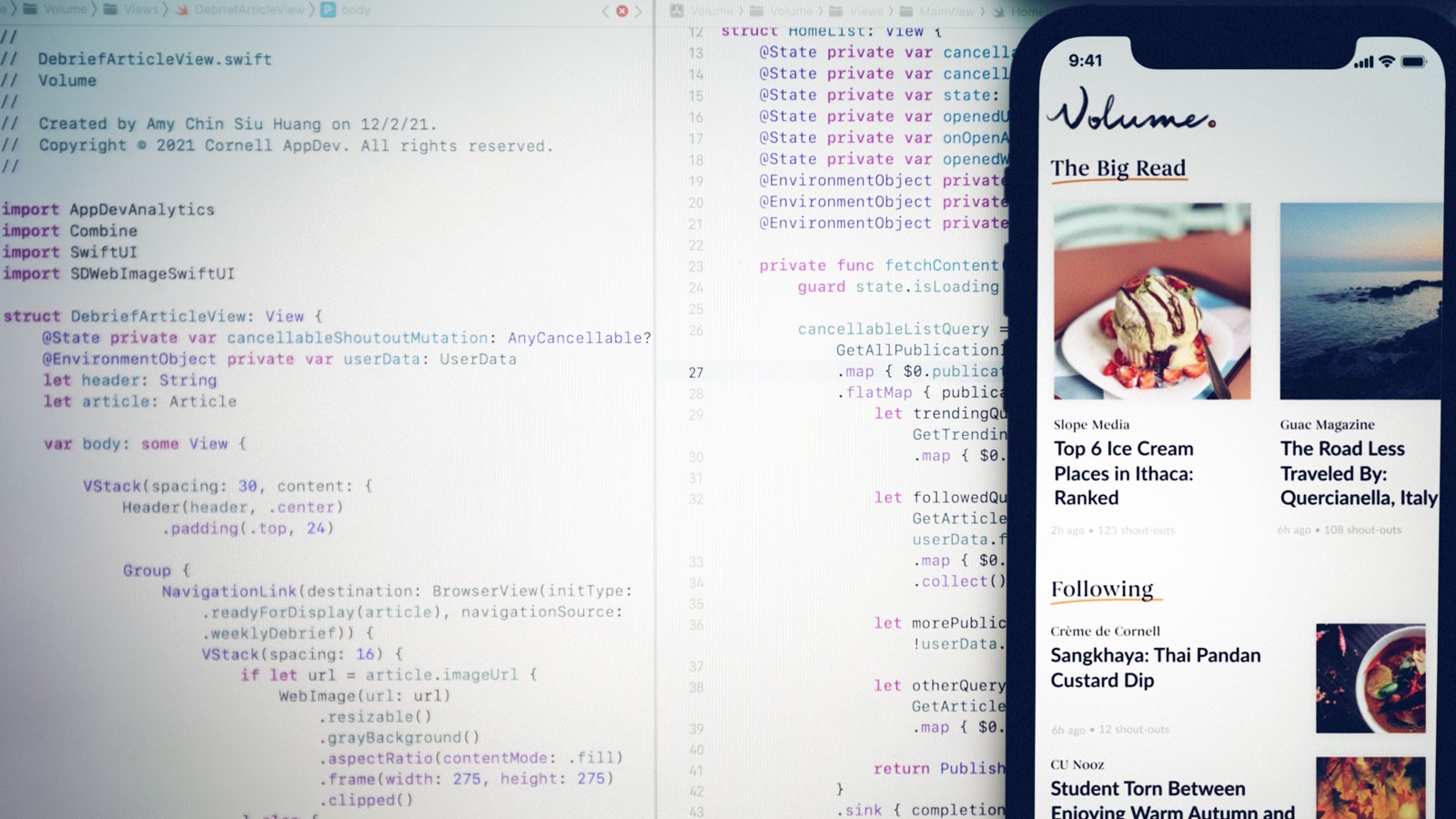 Code for “Volume,” alongside a screenshot of the app. (Photo by Sreang Hok / Cornell University)

“Seeing students use our apps is one the best feelings in the world,” says Tewodros “Tedi” Mitiku ’23, AppDev’s vice team lead (the number-two person in charge of the organization) starting in spring ’22. “Being able to write code and then have your code be used is awesome. Many people want the work they do to have an impact; having that in college is such an honor.”

Like most student project teams, AppDev admits its members through a competitive application and interviewing process. For many, a preliminary step is taking one of the for-credit, intro-level courses—on topics like digital product design and iOS or Android development—that AppDev offers, taught by students and overseen by Walker White, PhD ’00, a senior lecturer in computer science and the group’s advisor.

Our focus is on improving students’ lives; everything we make is intended to ease some sort of pain point they experience day to day.

A taste of working in industry

As White notes, AppDev—whose alumni include workers at a who’s-who of tech companies such as Facebook, Amazon, Apple, and Google—isn’t just valuable for offering hands-on experience, which is ubiquitous throughout the CS curriculum.

“The key thing is that the project teams are probably the closest approximation that a Cornell student would get to a real-world software company,” he says. “The pod structure, the leadership structure, the ways in which ideas are incubated—all of these are what they’d actually see at a company. So they’re essentially getting professional training.”

On the Sunday afternoon before Thanksgiving 2021, AppDev’s full membership gathers in Gates Hall for a meeting to pitch ideas for spring semester. (Per the University’s COVID-19 protocols in force at the time, such group meetings are allowed, but everyone is masked.) To get things rolling, the gathering starts off with some icebreakers—like displaying toddler-age photos of members and having everyone guess who they are.

Then—with levels of efficiency and collegiality that many a meeting-weary professional would envy—they get down to business. Each app idea is presented with a pitch and a deck of PowerPoint slides describing its potential utility, including feedback gathered through informal interviews.

The candidates include apps devoted to aggregating on-campus events; finding student groups and clubs to join; reserving meeting rooms in University buildings; and collecting Yelp-like recommendations of things like study spots and places to park.

“I just want to remind you guys—don’t get held up by the solution. Please focus on whether you think there’s even a problem,” says computer science major Alanna Zhou ’22, who’s running the meeting as AppDev’s team lead. “It’s great to say, ‘Oh, it’d be so cool to make that app.’ But that’s a big difference from, ‘Could people actually use it to solve a problem?’” 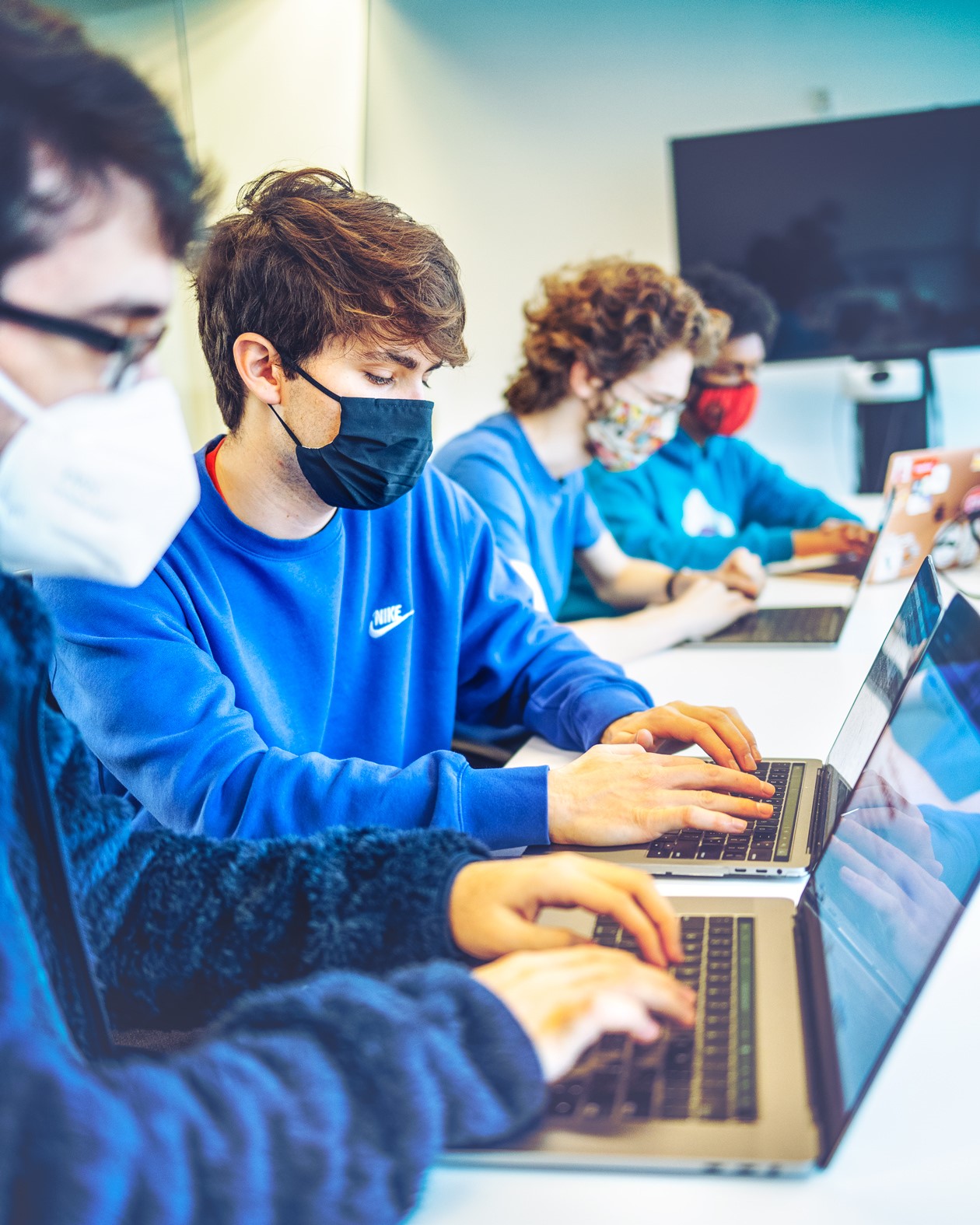 AppDev members have gone on to internships and jobs at major tech companies. (Photo by Sreang Hok / Cornell University)

Among the pitches is one that, in an online vote after the meeting, will be chosen as AppDev’s newest project: “Hitch a Ride,” which will match Cornellians who need transportation with those who have cars and are willing to drive them in exchange for gas money, a sense of security on long trips, or just some company.

“It has always been a debate internally at AppDev: how many new ideas do we want to pursue, versus how many old ideas we want to keep working on?” Connor Reinhold ’22, AppDev’s product lead, notes later. “Because we only have so many people.”

Given that students are busy with coursework and other activities, it generally takes two semesters for an app to go from concept to fruition. And sometimes, the group winds up cutting its losses and jettisoning an app after months of effort—as happened with one intended as an alternative to the physical “iClickers” used in class for quizzes and taking attendance.

“It was difficult to convince professors to use the app, so we pivoted off of that and jumped to a new idea,” Zhou explains. “Sometimes people just don’t need an app that we make. So we’re super flexible.”

And as she and fellow member Zain Khoja ’22 observe, that in itself presents a learning experience—particularly since, with AppDev, the final product is only part of the equation.

“We want to make sure that at the end of the day a student is benefiting from our work, but we also want to have growth for our members; there’s a good balance,” says Khoja, an information science major in CALS. “AppDev is an organization that’s full of great people who are really devoted to not only learning these skills, but helping the community.”