We are beyond the question of whether robotics are capable of assisting in human work. As evident by the fact that some surgical operations – the epitome of highly skilled, deeply consequential work – are now performed by human-robot tandems, we are fast moving toward a future in which robotics are part of our everyday work environments. 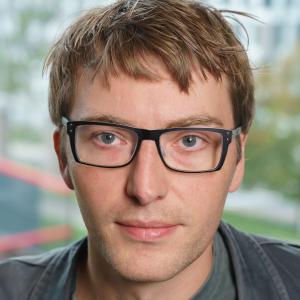 To adapt to this changing paradigm, human-robot interaction scholars like Cornell Information Science’s Malte Jung are helping us understand how robot assistance in work settings will not only alter our work processes but also our interactions with fellow teammates.

The National Science Foundation recently recognized the importance of Jung’s research, granting the assistant professor in information science and the Nancy H. ’62 and Philip M. ’62 Young Sesquicentennial Faculty Fellow its prestigious CAREER award for his proposal, “Understanding and Enabling Human-Robot Collaboration with Groups of People.” Jung's CAREER Award brings Info Sci's tally this year to two; colleague Shiri Azenkot also received one for her research on developing technology for people with low vision.

“Human-robot interaction is not just about how you interact with technology, but how the technology affects how people interact with other people,” said Jung, who also directs the university’s Robots in Groups Lab. “It’s about moving beyond this one-to-one paradigm between a single human and a single robot into a group and team context because, the fact is, people rarely work alone.”

Research suggests that a robot’s behavior – like its gaze toward human teammates – impacts our perception of the robot and creates a more inclusive work environment. Elsewhere, previous research from Jung found that humans have strong reactions to how a robot allocates its assistance to the team.

Expanding on these ideas, Jung’s NSF CAREER project will delve deeper into “machine allocation behavior” – the algorithmic processes that tell a robot where it should allocate its attention and support to ensure the team successfully completes its task.

As Jung explained, in one-on-one work settings between a person and a robot – referred to as a “dyadic” human-robot collaboration – the robot is trained to focus its attention on assisting that single person. But what happens if there are more coworkers involved? How do we train robots to make decisions on which teammates to prioritize for assistance?

“That’s the question I wanted to focus on because it includes aspects of the algorithm side of the robot and the behavioral side of the robot,” Jung said. “What consequences does a robot’s attention have on people’s interactions with each other?”

As part of this research initiative, Jung intends to develop and install a Tetris-style game at Ithaca’s Sciencenter, an interactive museum for children. The game allows two players to work collaboratively, with a big catch: only one of the players can control the blocks at one time. Further, an algorithm will decide, based on participant performance, which player should have control of the blocks. The point, Jung said, is for the algorithm to find a balance to keep both players involved, cooperating, and succeeding.

Jung hopes his research will have broader impacts beyond the field of human-robot interaction. People often view robots as replacements for humans in work environments, rather than envisioning robots as enabling new forms of teamwork between robots and people, he said.

"The long-term goal for this research is to develop theory about a robot's impact on interpersonal dynamics in teams and to develop strategies for robots to act in ways that help teams perform at their best," he said.

Cornell Research Development, within the Office of Sponsored Programs, assisted Jung on his proposal, offering guidance on the broader impacts and design components and in developing a partnership with the Sciencenter.