Chris Csíkszentmihályi’s work eludes conventions and easy categorization. This has been the case for most of his career, beginning in his early days as a designer at the acclaimed Doblin Group design firm. There, his bosses – perplexed with what job title to bestow upon as employee with diverse interests and skills in design, coding, and analysis – settled on “Renaissance Guy.”

“They were already responding to the fact I was resisting one or another career path,” he recalled. 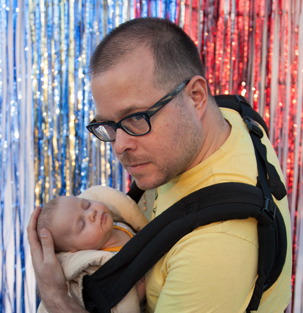 Today, the spirit behind “Renaissance Guy” still applies: Csíkszentmihályi is a technologist, technology critic, artist, builder, founder, and, as of July 2020, an associate professor at Cornell.

“Info Sci is a dream department,” he said. “It’s a meeting of strong social sciences and strong information technology, but then it also collaborates with Science and Technology Studies [STS] and has a growing core of people with humanities practices. That admixture is fantastic.”

Previously, he was a European Research Area Chair in Portugal, and founded the free/libre RootIO Project, a sociotechnical platform for community radio. He has been a professor at universities in the United States and Europe, notably founding and directing the MIT Center for Future Civic Media (C4) and the MIT Media Lab's Computing Culture group. He holds an MFA in visual arts from the University of California, San Diego, and a BFA in visual arts from the School of the Art Institute of Chicago.

His career as an interdisciplinary technologist and critic was formed initially in his renaissance role at Doblin, a strategic management consulting firm that championed “design thinking” long before it became fashionable. He knew a bit of computer coding, and soon he was being asked to speculate technological solutions for the firm’s biggest clients, working as an applied technology futurist. This nudged Csíkszentmihályi closer to the Research and Development side of technology and to a career as a technologist.

“I got to see how the possibilities of Research would get filtered down in Development,  and filtered further by the market,  so that by the time products reached us, they were a tiny subset of what could have been possible. That was the moment I discovered a vocation,” he said. “I began thinking as a critical technologist: What products would I like to see that aren’t going to be made? What products got made that shouldn’t be made? and finally, Why is that?”

Part of the answer: Politics, he said.

“Every technological device is a political device. Because technology is funded by large companies and governments -- by people with money and power -- technologies tend to be regressive,” he said. “They recreate and ossify the power that made them.”

Csíkszentmihályi’s work has explored the question of who isn’t being served by technology. This investigation has given rise to projects like RootIO, a web-based radio platform used in rural communities in Uganda, Ireland, and Romania, and ProBots, a zany if not entirely practical deployment of robot protestors mounted with megaphones that can be controlled remotely during demonstrations, inverting military drone programs. Other notable projects include several continuing initiatives that originated during Csíkszentmihályi’s time as founder/director of the MIT Center for Future Civic Media, including Between the Bars, Public Lab, and open.sourcemap.com.

Climate change and accountability will be a focus of Csíkszentmihályi’s research at Cornell Info Sci.

“To think it’s only climate scientists who can solve the issue, or to think you can change it with consumption habits, is a mistake,” he said. “The planet’s future is an existential problem that requires people with many different skills, the more the better.”